This page provides general information about some of the procedures that your Doctor may consider when determining which is most appropriate for you.

This is background information only and should not be interpreted as a recommendation about any particular procedure. Your Doctor will help you choose the most appropriate option for your specific condition and circumstances. 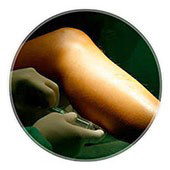 The treatment of varicose veins is typically performed with one or more of these goals in mind:

In order to determine the full extent of your venous problems your Vein Doctor will generally begin with a detailed examination. This then allows your Doctor to plan the most appropriate course of treatment for your specific condition. This diagnosis may include:

There are a range of procedures which your Vein Doctor may consider in planning your treatment. These options include Ultrasound Guided Sclerotherapy, Endovenous Ablation, and a number of Surgical approaches.

Each type of procedure has specific risks and benefits, pros and cons, and they can be particularly suited to certain types of veins. Your doctor will work with you to decide on the most appropriate treatment plan based on your specific circumstances and the nature of your vein problems.

Depending on the nature and extent of your vein problems, it may be the case that the most appropriate treatment plan involves more than one of these approaches, performed in one or more different treatment sessions.

Ultrasound Guided Sclerotherapy involves the injection of a solution called a sclerosant through a needle into the target vein to be treated. A Duplex Ultrasound is usually used so that the Doctor can visualise the needle inside the vein during the procedure. The treated vein undergoes fibrosis and over time will be removed by your body. This process can take a few weeks, and so if your Doctor feels that multiple treatments to the same area are necessary they will often be scheduled a few weeks apart.

Multiple injections are usually necessary, depending on how extensive the area to be treated is. An Ultrasound Guided Sclerotherapy procedure may take as little as 20-30 minutes.

Treatment by sclerotherapy rarely involves serious complications but can more commonly involve minor side-effects such as redness and bruising, phlebitis (inflammation of the treated area), pigmentation (a usually light ‘staining’ of the skin in the treated area), and small tender lumps which contain trapped blood. These are indications that the treatment has had its intended effect and usually they disappear without issue in a couple of weeks. In some cases pigmentation and matting can persist for a significantly longer period though. Your Doctor may recommend the use of compression stockings for a period of time after your treatment to help reduce the extent of these side-effects and maximise the benefit from your treatment.

Ultrasound Guided Sclerotherapy does involve some more serious potential side-effects, which your Doctor will discuss with you before your procedure.

Endovenous Ablation is a newer technique than Ultrasound Guided Sclerotherapy and involves the insertion of a long catheter into the target vein to be treated. An Ultrasound will also be used in this procedure so that the Doctor can visualise the position of the catheter within the vein. Once in position, the Doctor will activate the catheter and begin treating the vein.

There are three main types of device that the Doctor may use to ablate (remove) the diseased vein. Laser devices ablate the vein using heat generated by light from a laser unit. Radiofrequency devices also involve heat, generated in the form of radio energy. Other devices use a combination of the mechanical action of a rotating tip with the chemical action of the same type of sclerosant solution that is used in sclerotherapy.

Each of these different types of Endovenous Ablation procedure can be performed in both an outpatient setting or within the hospital as a day-patient. The procedure may last from 20 to 90 minutes and afterwards you can return to your normal activities immediately.

Each of these procedures involve the risk of side-effects, which your Doctor will discuss with you in detail beforehand. Your Doctor may also recommend the use of compression stockings for a period of time after your treatment to help reduce the extent of these side-effects and maximise the benefit from your treatment.

A range of surgical techniques can also be used to treat varicose veins. These may include one or more of the following:
These are the two most common surgical procedures for varicose veins. There can be other less common variations such as endoscopic vein surgery, where a device with a tiny camera is inserted into the vein to visualise the points at which incisions will be made.

All surgical procedures involve the risk of side-effects which your Doctor will discuss with you before your procedure.